Greyhound Compassion volunteers have returned from an action packed visit to the Protectora y Santuario Scooby in Medina del Campo. The four of us tried to cram as much into the trip as we possibly could.

We did the usual cleaning, hosing, tidying, food preparation and sorting jobs and then tried to complement these with a few extras! So many lovely and friendly galgos were in residence. Scooby is expecting many more galgos to be dumped during the early months of the coursing season (now open) because the hares have a mutated form of myxomatosis. This is bound to increase the numbers of galgos coming into the shelter during the winter as hunts will be aborted, not to mention the suffering of the poor hares. 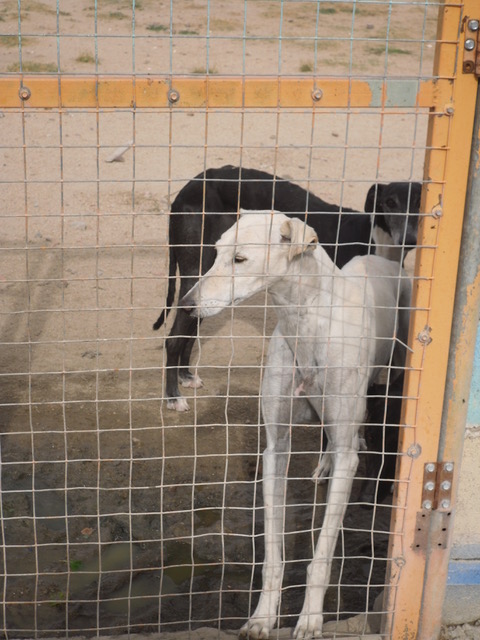 We persuaded the fund-raising committee to delay a shelter open day by one week so that we could help out. Seemed like a good idea at the time but what we didn’t realise was that the weather would be such a big influence (not quite the “come rain or shine” mentality we are used to in the UK). On the open day the weather was chilly and threatened rain but the dedicated Spanish supporters came along for a tour of the shelter and refreshments.

The Brits introduced the idea of a “lucky dip” for the children and another technical game of skill and nerve for the teenagers. Unfortunately somebody let the recently rescued puppies out for the children just as they approached the “lucky dip” - who could compete with half a dozen appealing puppies? We raised a few Euros in aid of the shelter but can’t help thinking it would have been better not to have interfered and to have left the organisers to capitalise on the sunny weather one week earlier. Still it was good to showcase the animals and hard work of Scooby. In the same week, the Scooby rescuers had completed the last of several visits to a dog collector to rescue many neglected and ill-treated dogs.

We were really pleased to see that work had started on replacing the dilapidated fencing around the enclosures in the oldest part of the shelter - all 800m around corridors 7 and 8. This will improve immensely the conditions for the galgos in the shelter. It gives the dogs the benefit of natural light and fresh air in their outdoor runs but without a transparent view into each others’ territory, withdrawing the opportunity to antagonise each other, or to dig under the fence to reach the neighbours, or break out and go on a tour of the shelter!

Thank you to all of our donors who helped to make this much needed work possible. We launched in January 2018, appealing for €20,000 for the project and reached the target in September with the work starting in October. Donations came from Greyhound Compassion, Galgos Greys and More (Switzerland & Germany), Scooby’s Slovenian marathon runners in the Medina del Campo half marathon, a Dutch craft circle and their on-line auctions as well as some private donations. Thank you!

Protectora y Santuario Scooby benefits from the many volunteers who visit but we’ve come to realise that the written ground rules do not go far enough in today’s world of instant messaging and interactive communications. With this in mind we helped to make a video at the shelter to remind volunteers to respect Scooby as the home of the animals and to show what value volunteers can add when working at the shelter. The film certainly conveys the message but only after a number of outtakes. We had to contend with puppies tormenting the oldies while they were being cleaned out in the background, galgo needle noses poking into the camera, changing weather, poor scripting and very amateur camera skills on a selfie-stick until a fellow volunteer took over. The final product will certainly serve the purpose and what a laugh we had making it!

Scooby, shelter and sanctuary, has been providing a home to mistreated and abandoned animals for more than 30 years. It was created thanks to the initiative of a group of women who wanted to do something about the amount of abandoned dogs in the area of Medina del Campo (Valladolid). In the nineties, Scooby brings to light the atrocities inflicted on Spanish galgos and its work is internationalized...